From Deepeeka
Jump to: navigation, search

The PickleHaube (literally, pointed bonnet) also called a "Pickelhelm", was a spiked Helmet worn in the 19th and 20th centuries by German military,Firefighters, and police.

This is one of only two patterns of military Pickelhaube that carry the unique combination of a visor and spike base that do not match.

This style of helmet was originally invented in 1842 by King Frederick of Prussia. The style may have been inspired by similar helmets worn by the Russian army at the time.

Similar styles were worn by the German military, firemen, and police force during the 19th and 20th centuries.

Although typically associated with the Prussian army, the helmet was widely imitated by other armies during this period. 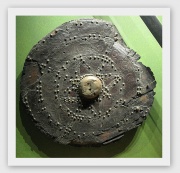 A similar targe is on display at the National Museum of Scotland.